When it comes to golf, we’re down for almost anything. Crazy golf, mini golf, putt-putt, or any other variant; we’re always up for a round. We’ll even play normal, proper, ‘big‘ golf. After all, nothing beats walloping a tiny ball around the countryside in loud trousers.

We’re also partial to video game versions of the sport and Nintendo consoles have a rich history of great golf games, many of which have featured a certain mustachioed mascot. Mario and his Mushroom Kingdom pals have recently brought their clubs and caddies to Switch, but even without the plumber and his crew, the console has built up a bagful of quality golf games since launch.

With that in mind, we’ve collected together our picks of the best golf games on Switch (or, more accurately, the best golf-inspired games on Switch). They run the gamut from crazy to contemplative… actually, they tend to congregate on the ‘crazy’ end of the scale, but PGA Tour 2K21 now provides some more sensible simulation if you prefer more decorum and less fireworks on the fairway.

Regardless, you’re sure to have a good time with the games below whether you’re a scratch player or you hack your way from bunker to bunker like us.

So, without further ado, let’s check out the best golf games on Switch. Fore! 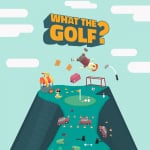 What the Golf? is a game that’s hard not to love; a riot of accessible, physics-based silliness and great fun whether you like golf or not. In fact, it’s perfect for bringing along a second player who doesn’t want to get stuck caddying. You can’t go wrong with this off-the-wall indie hit and we recommend you slide this into you golf bag at once. 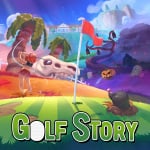 An RPG in the mould of Camelot’s exquisite Mario Golf on Game Boy Color, Golf Story was one of the breakout indie hits of Switch’s first year, and it’s lost none of its appeal since then. It’s getting a multi-sport sequel named Sports Story sometime soon, so there’s no better time to check out this top-down treasure. 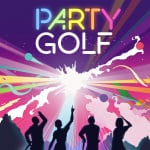 Party Golf turns the tranquility of the real game into a mad, simultaneous dash between you and your friends as you race against the clock to whack your ball into the hole on a side-on 2D course. With plenty of customisation options and a multiplayer focus, this offers a fine four-ball experience where you don’t have to wait politely for your fellow golfers to slice their way to the green for a triple bogey. 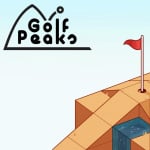 Isometric puzzler Golf Peaks is yet another in Switch’s lineup of fun and rewarding alternatives to a ‘proper’ golf game that began on mobile before getting a Switch port. It’s a short experience, best enjoyed in small chunks, but you’re sure to enjoy your time with it. Who wants to traipse around a soggy hill for four-and-a-half hours on a damp Saturday morning anyway? Brisk and breezy, please.

Coming from Zen Studios, a developer better known for its pinball games, Infinite Minigolf isn’t perfect when it comes to UI and clearly communicating its features, but it delivers a very solid, well-presented game of miniature golf and features a plethora of official and impressive user-created courses to enjoy. You can also build your own in the game’s comprehensive editor. 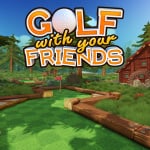 Golf With Your Friends provides a chaotic golf-like game with 12-person simultaneous online multiplayer which really shines if you can get some similarly-skilled friends to join you. Be aware that mixing skill levels and playing with random people takes the shine off things a tad. However, provided you’ve got enough friends online, this can be a riotous hack around some legitimately ‘crazy’ golf courses. Just make sure you heed the ‘With Your Friends’ part of the title, otherwise it’s just ‘Golf’, which is as fun as it sounds. 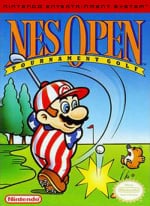 If you’re after an early digital version of the sport, Hamster’s Arcade Archives Golf brings the arcade original Golf to Switch. It’s a game which hails from an age where video games could just use the name of the sport as a title without anything else. It’s also the title which popularised the familiar power bar swinging mechanic many golf games use to this day.

However, if you subscribe to Nintendo Switch Online, you have access to its follow up, part of the Nintendo Switch Online offering of NES games. While the formative systems and mechanics put down in the ’80s have advanced a lot in the interim, the core gameplay of NES Open Tournament Golf is as solid as ever. Plus, it’s presently the only golf game on the system that puts Mario on the tee. Enjoy a swift nine holes if you haven’t played it yet. 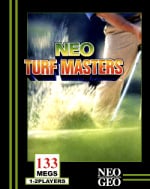 Thought we’d forgotten this one, eh? Neo Turf Masters (or Big Tournament Golf as it’s known in the US) is a satisfying arcade take on the game and one which still holds up very well to this day. The lack of career mode means it’s hardly a long term investment, but as short and sweet arcade golf games go, this is a great one. Just don’t expect to be playing it for hours on end. 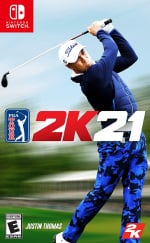 PGA Tour 2K21 plays a solid golf game with enough flexibility in its control settings to appeal to both die-hard simulation buffs and casual golf fans just looking for a quick round. Its real-life pro players are so underused they may as well not be in here and the game may not yet have the typical 2K Sports trademarks – the polished story mode, the slick TV-style presentation – but it also isn’t plagued with microtransactions, and the result is a game that, refreshingly, just gets on with it.

Please note that some external links on this page are affiliate links, which means if you click them and make a purchase we may receive a small percentage of the sale. Please read our FTC Disclosure for more information. 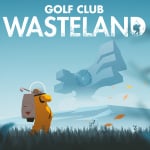 Golf Club: Wasteland offers simple, straightforward gameplay with pleasant visuals and barely any UI to get in the way the view of its post-apocalyptic ‘fairways’. Neat tunes and background story points provide some nice narrative texture and help bolster the golf, which can get a bit repetitive after a while. Some tiresome neon signs adorning the environment riled us up a little bit, but if you’re looking for a golf game that offers something a bit different, Golf Club: Wasteland is definitely worth a twilight round. 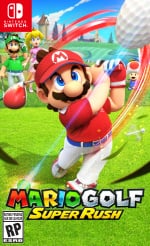 Mario Golf: Super Rush is a game that in many respects hits its marks. Golf Adventure has plenty of charm and offers a fun way to learn various mechanics and unlock courses. Away from that solo endeavour there are decent options and customisation for multiplayer games, local or online, button controls or motion-based swinging. It’s not a premium effort, however, with a nagging feeling of corners cut and at times an absence of creativity. However, many players should get a good amount of fun out of this one, both solo and with friends. This ain’t the Masters, but for Mario Golf fans it is a solid par.

Not a bad collection if you like to whack little digital balls around, hmm? Until the two-ball pair of Mario Golf for N64 and Mario Golf for GBC arrive on Switch, these will do nicely. Let us know below which of these you think are up to scratch or if you think there are other Switch golf games worthy of this list.