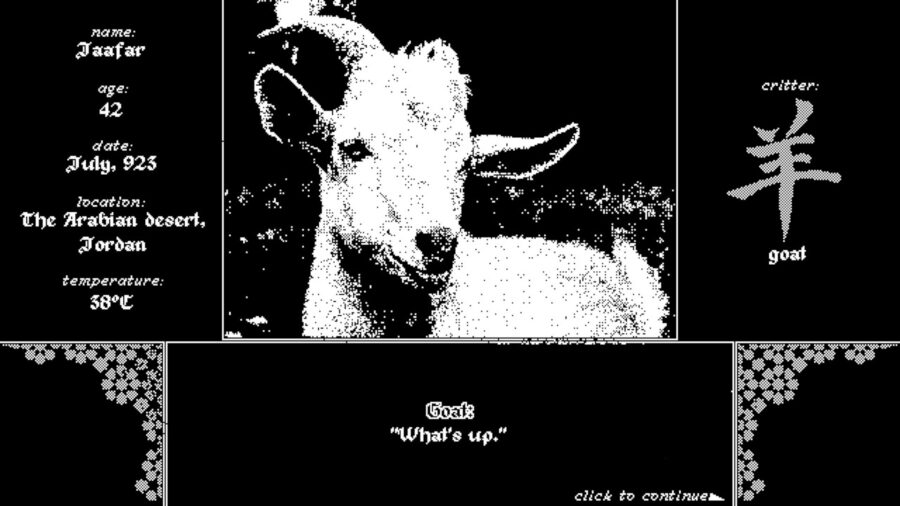 One part visual novel horror game, one part point-and-click detective game, Critters For Sale is all existential terror. A highly-stylised five-part series, each led by a different protagonist at a different point in history, the first episode is free on Steam now.

Adequately describing Critters For Sale, from developer Sonoshee, isn’t easy. There’s elements of Disco Elysium and its choice-based surrealism, the overall unease of the Silent Hill series, and bits and pieces of Life Is Strange, The Dark Pictures Anthology, Nier: Automata, and plenty more besides. Channeling ideas from Middle-Eastern and North African folktales, you control five different people who find themselves at a pivotal point in a struggle against an unknowable force, and through your choices, they’ll survive, or everyone’s doomed. Usually videogames carry on.

“The game puts you in the shoes of characters that marked the unseen history of the world as we know it, right in the center of events that portray a cosmic force looming above, vouching for evil, wanting to see you and your world crumble,” reads the Steam page. “The actions and choices you make throughout the game influence the outcome of each episode, ultimately leading to your death or survival. Evade your doom, and you might be able to make a difference in the grand scheme of things.”

You can play the five episodes – Snake, Goat, Monkey, Dragon, Spider – in whatever order you like, and there’ll be multiple endings depending on what you choose, and whether you kill the cursed cat or not. Snake is freely available on Steam now.

Check out the trailer:

Critters For Sale launches on June 3.