Boss rush games are something else. When combined with the concepts behind the recent Doom games, the result sounds quite intriguing. Such is the driving force behind the game Everlasting Guilt, which entered Early Access today. The game will likely be in development for another one to two years, and currently has six bosses included, as well as two levels to fight enemies in. The game has some pretty big shoes to fill due to its influences, and only time will tell how it ends up coming together. So, the question stands: is Everlasting Guilt worth it in Early Access?

Everlasting Guilt is one of those games with menus and an overall presentation that feels placeholder more or less. As the current version is an alpha, this isn’t too detrimental, but the on-screen text used to set the stage when you start a new game could use some major overhauls, at least in English. You can choose to play the game on normal or easy. As it’s a boss rush game, it’s far from a pushover on normal. When you start out, you’re dropped directly into a boss fight tutorial. Although this is a first-person shooter, it takes a lot of inspiration from games well outside of that strike zone.

For starters, your character is equipped with a sword that is used for parries and abilities. Many enemy attacks can be parried, including melee strikes and projectiles. You have two guns: an assault rifle and a shotgun. You can freely swap between the two with a press of the q key, and both have infinite ammo that refills after you either lay off the trigger for a second or run out temporarily. You also have two abilities that you earn very quickly. One lets you hit enemies with a projectile that damages them over time and chains this effect to foes nearby, while the other is a three slash projectile attack with your sword. 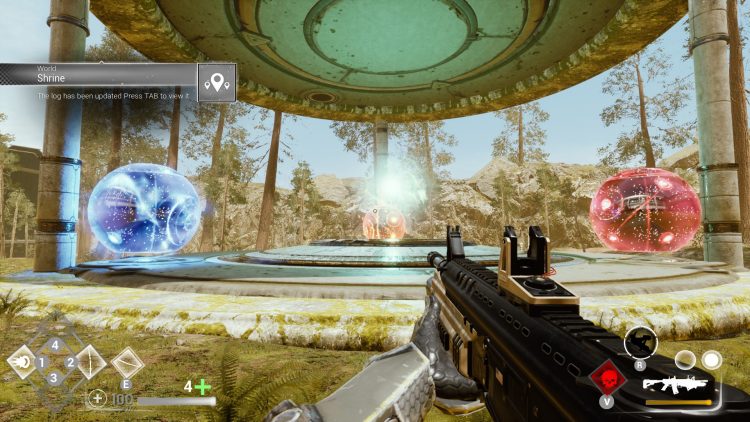 Fight ’em til you can’t

Upon getting out out of the tutorial, you’re let loose in the first hub, which has you hit up the first level. Levels take you through a series of arena fights much like the modern Doom games, pitting you up against multiple enemies that each have unique characteristics. There’s the enemy that explodes if you destroy their reactor, a large enemy that rolls at you and leaves trails of flame everywhere, and a big Spider Mastermind-looking fellow that slows down time when hit with your sword strikes. You’ll want to watch out for the rolling enemy, as it feels overpowered and does a large amount of damage. It can easily take away half of your life with one hit.

But you can heal, at least. You get four healing charges. Upon beating a level or boss, you also get a skill point that lets you purchase a new skill, such as increasing your heals or giving you 10 health back if you dodge an enemy attack. Each hub has three bosses that you can beat in any order. Beating them opens the way to the next. As you’d expect, boss battles are where Everlasting Guilt shines. These multi-phase fights will keep you on your toes.

The enemy design and ideas in Everlasting Guilt are all commendable, but the gameplay doesn’t hold up as well. There’s no weight to anything. The guns have no impact, enemies don’t really respond to getting hit, and your movement is also weightless, making you feel more like a floating camera with a gun attached to it rather than a warrior. As such, the shooting and movement simply feel cheap and unsatisfying, and these are the biggest things wrong with the game. Everlasting Guilt also doesn’t run very well, with a highly variable framerate at 1440p on a midline graphics card. Due to these issues, it’s hard to say that Everlasting Guilt is worth it at this point. If the devs are able to iron the issues out, then I could certainly see a lot of people enjoying what it has to offer. 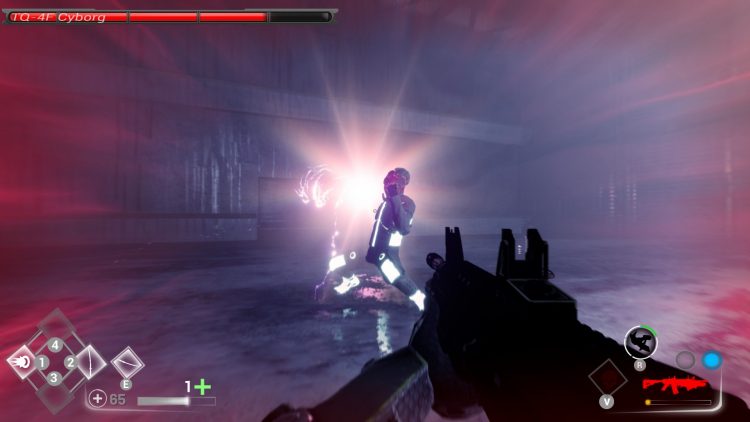