Necromunda: Hired Gun is so close to being Warhammer 40,000 Doom.

Necromunda: Hired Gun’s reveal in March caught me a little off guard, doubly so when I realised it’s out in June and not some years into the future. Streum On, the small French team behind it, typically takes a while to put out a new game.

But years of experience and Focus Home Interactive’s newfound support have clearly helped the team arrive at the perfect size and scope for its games, because Hired Gun is a game that entertains, and sometimes impresses, without falling into the trap of overambition.

Necromunda: Hired Gun is a fairly easy game to explain. It’s a first-person shooter with a linear story. You play as a bounty hunter who’s sent after targets hiding in expansive Warhammer 40,000 locales. You do that with the help of a surprisingly big arsenal of weapons, which take the form of loot of varying rarities you can customise, upgrade and tweak in a hub world.

It’s not anything you haven’t seen before, but that more often than not helps rather than hinders. Hired Gun largely delivers because of its satisfying – albeit predictable – loop.

Being set in one of Warhammer 40,000’s underexplored universes helped every story mission stay fresh. This isn’t your typical jingoistic stroll with xenophobic Space Marines. The criminal underworld of Necromunda is made up of cliches – dingy bars, repurposed factories, and junkyards where gangs operate and fight over territory – but part of what makes it work is that those same places share Warhammer 40,000’s propensity for grandeur. One mission had me fighting around and boarding a massive cargo train, while another sent me to the site of an industrial drill to infiltrate the micro popup town that supports it. My desire to see what strange location the game was going to send me next kept me hooked on the main story thread, but it’s the game’s combat which made that journey exciting.

Much like its general setup, Hired Gun borrows a lot from other great contemporary shooters. It’s mechanically closer in feel to the new Doom; always surrounding you with enemies in arenas where you’re free to whip around from one spot to the next, sometimes flanking and other times taking cover. Movement leans a little closer to Titanfall, with fairly responsive animations, the ability to wall-run, and, of course, a grappling hook. This is already a solid mix, and Hired Gun often brings these inspirations together well, but a lot of times, it loses some of its grace.

Most of the game’s movement abilities are unlocked from the off, or shortly thereafter. It felt good to have this much freedom from the onset, but the controls’ tendency to feel imprecise took away from the feeling of power. 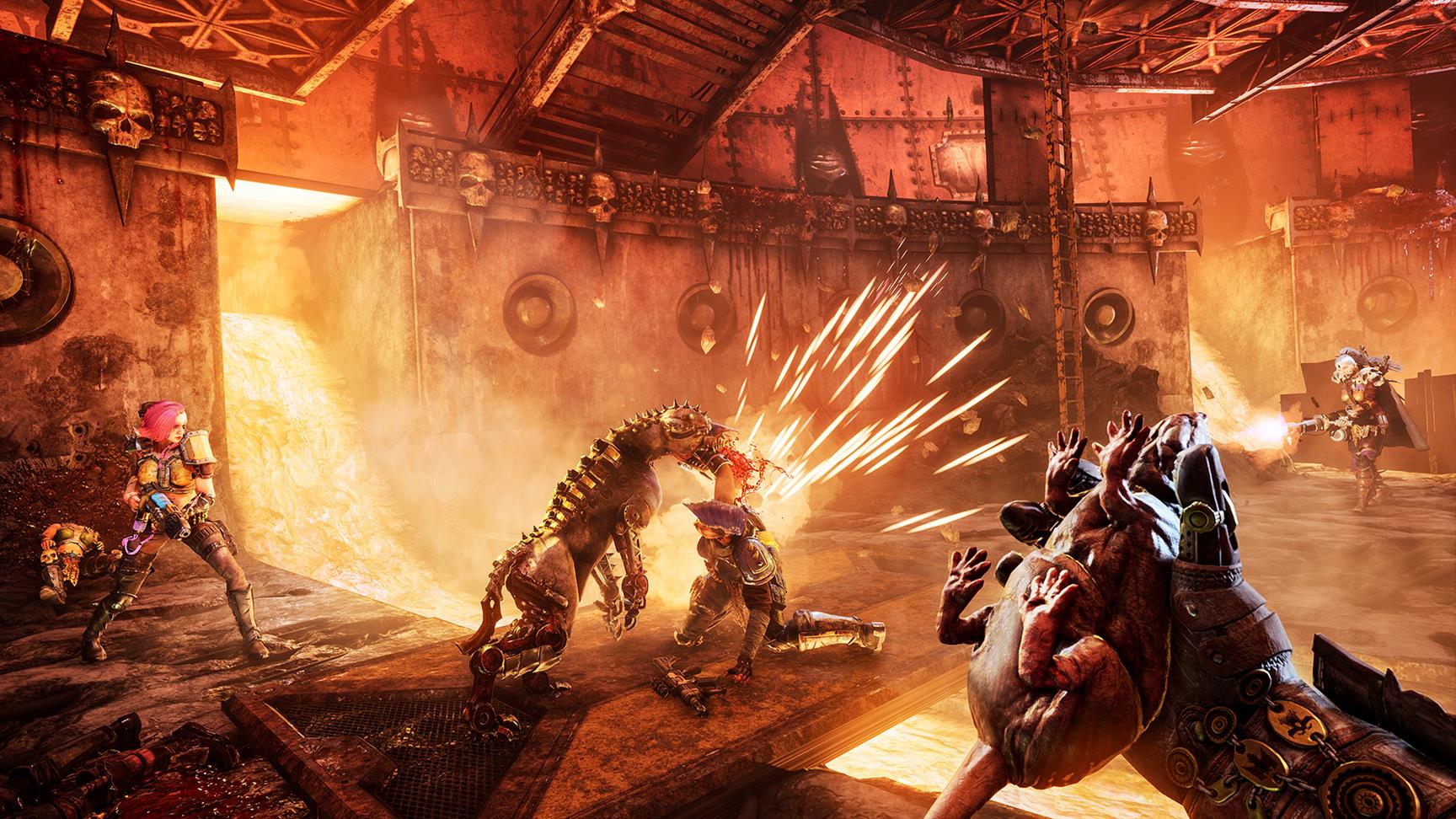 Take wall-running, it’s activated by holding the space bar when you’re close to a wall. But the space bar is, of course, your jump button. Jumping into a wall, wall-running and jumping away all inexplicably use a single button. This finicky setup made it harder to pull off in the heat of combat than it needed to be, and stopped me from regularly mixing in wall-runs.

The grappling hook has a similar problem. Though it can impressively latch onto any point in the environment, it’s not always clear what’s too far or too close. The grappling hook’s physics are otherwise serviceable, but rudimentary compared to Titanfall; it sucks you into whatever you lock it onto, and doesn’t take your momentum into account. You won’t be using it to wrap around corners like you could in Respawn’s games. It’s fun to use, but doesn’t always have a place beyond letting you yank shields off certain enemies. Your base jump in Hired Gun is already fairly high, and can be further boosted with upgrades. Oftentimes, I’d go entire levels without needing to wall-run.

One other thing the game borrows from Doom is the dodge, which is realistically what you’re going to rely on the most in combat. This is fine, but makes it feel like the other abilities are a little wasted.

Your companion mastiff is another potentially interesting addition that falls a little flat. Pathfinding for the dog is spotty, and though it does help with crowd control while you flank or deal with a different group, the way it works is so rigidly mechanical it makes it feel like a hologram from Miles Morales or any other cyberpunk game.

I would have liked to see that relationship evolve in some way, but that’s another area where Hired Gun is lacking. 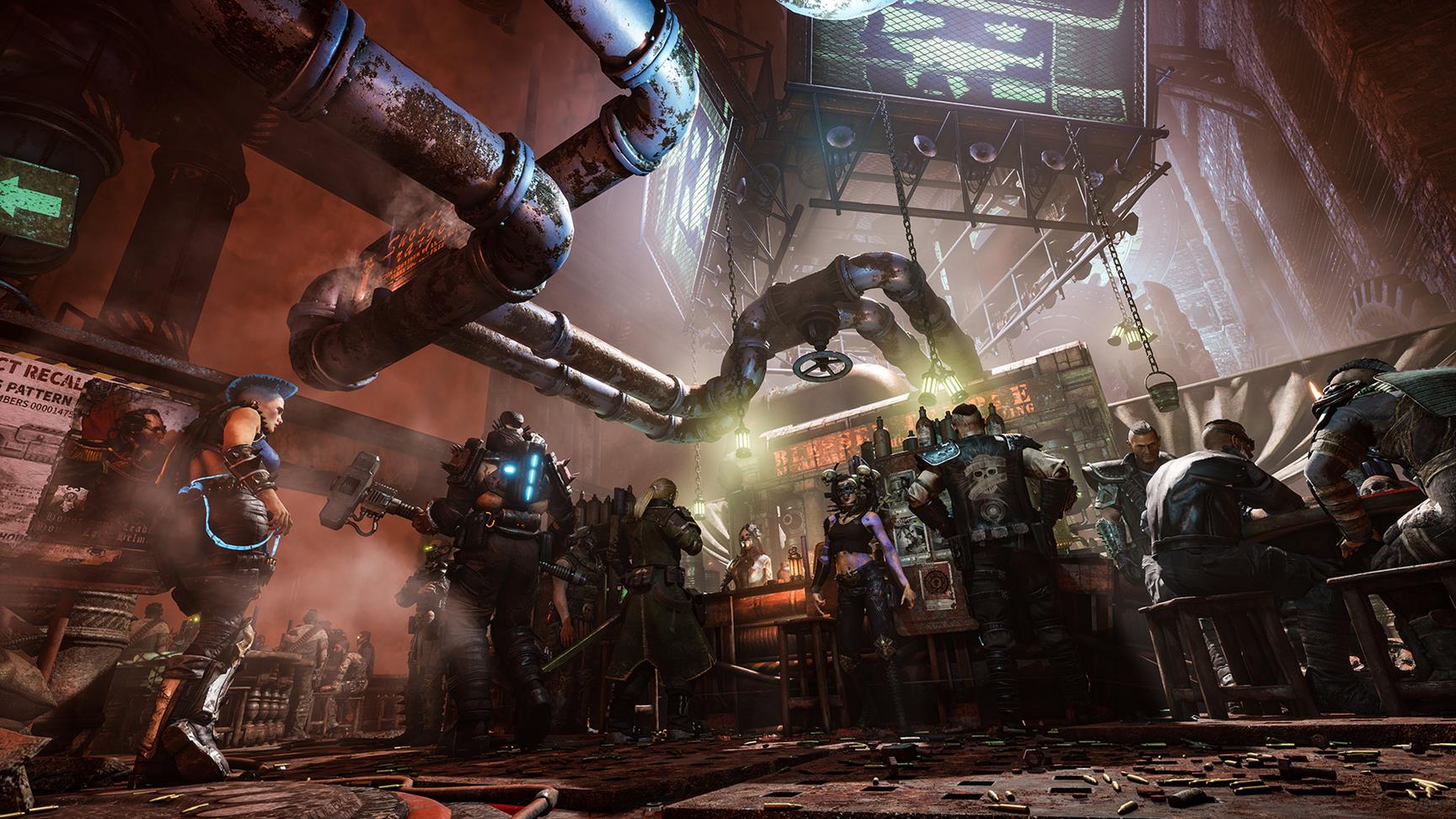 In-between missions, you go back to the hub area to chat up some NPCs, browse side missions that revisit areas you previously explored, sell whatever excess loot you found, and spend your earned money on character upgrades and new abilities for you and your canine friend. Martyr’s End is its name, and it’s also where the story… happens. Most of your conversations there will be with your handler, who’s the main driving force behind the narrative. These moments are so brief and so often lack tension, the game almost feels like it’s trying to get through them as quickly as possible.

Though there are a couple of standout scenes and some genuinely surprising moments, most of the acting is wooden and overly stilted, even for a Warhammer 40,000 game. When I wasn’t hoping the cast would do a better job, I was often wondering why the audio mix was so lacking. One character whispers almost the entirety of its lines – likely intended to come off as discreet – but they’re just too quiet it sounds like the actor recorded their dialogue over the phone. So many dramatic moments are undercut by how deemphasized the voice track is in the mix.

Even initiating these conversations can be a bit of a chore. You have to wait for characters to turn the right way for the interact prompt to work, and a cyberpunk-y visual glitch effect can make it harder to read subtitles. This lack of polish can also manifest in things like the stutters that occasionally occur in combat when you transition between areas, or in how there’s no way for you to edit your loadout without starting a mission.

Things like that are fine in isolation, but the bulk of them occur in Martyr’s End, so you’re often reminded of Hired Gun’s shortcomings just as you got done with its better part.

Beyond general polish, my biggest problem with Hired Gun is encounter and level design. I am not so much talking about the layout of its various arenas – those are typically interesting to explore – particularly if you’re going for all the hidden chests – and big enough to allow for a good range of combat. 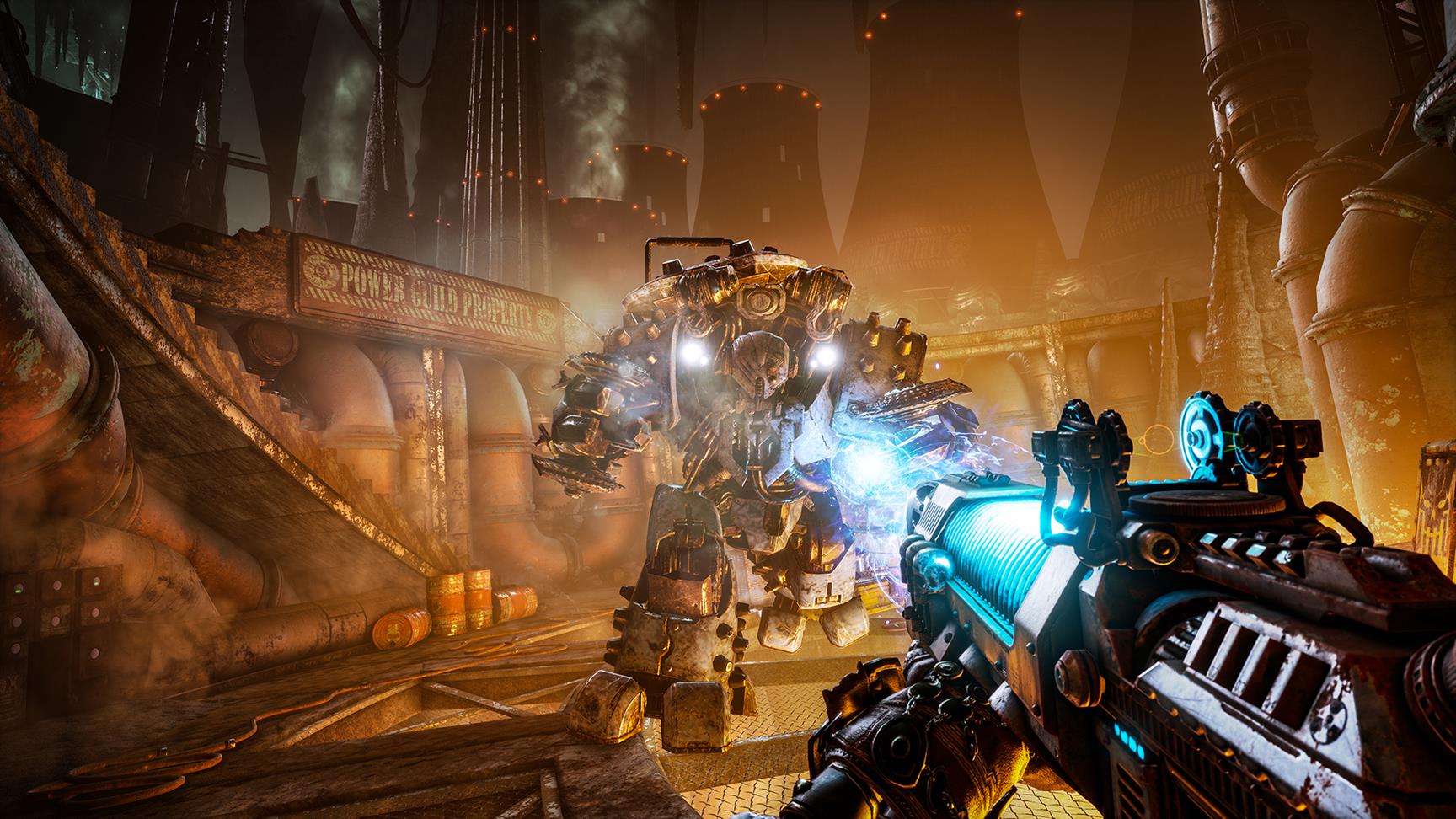 My main issue is with how encounters happen within levels themselves. You either start off in stealth, at which point it’s incredibly easy to break that and immediately get into the thick of it. There’s no detection meter, or HUD indicators for line of sight. You’re either detected or undetected, and it’s never clear what you did to alert enemies. Considering how action-happy Hired Gun is, and the fact fights will almost always break out regardless, these moments of stealth don’t always make sense.

When the fight starts, the biggest challenge is actually trying to see where the damn enemies are. I’ve constantly messed around with my brightness settings just to try and figure out a consistent way of identifying enemies. Watching my footage, there are countless occasions where I stop shooting because I think it’s clear only to continue taking hits from an enemy incredibly close to me that I just didn’t see.

Every time I was done with an enemy wave, there’ll be about 30 seconds where I am trying to figure out if I am good to move forward, or a new wave has spawned somewhere that I need to find. Enemy visibility problems are exacerbated by the fact they like to duck, weave and lean. A lot of times, you’ll only see their arm poking out from around a corner pelting you. This isn’t exactly a colourful game, so part of that ambiguity is welcome, but making enemy silhouettes too dark, or giving a lot of them active camo, causes Hired Gun’s otherwise stellar action to break. In well-lit areas, the smoke and particle effects can, too, be overpowering on their own, and often obscure enemies in large fights.

There’s the sense that Streum On tried to compensate for these problems with a few mechanics. There’s an area scan upgrade that highlights enemies, but before you can afford that, simply summoning your mastiff can reveal enemies through walls. This is actually the main reason the dog is useful. There’s also a Bloodborne-like healing mechanic where if you deal damage shortly after taking it, you get some of your health back – another cool idea that doesn’t always have a place.

You’ll be down to the wire in some corner, and immediately get back in the fight because you took out one enemy. The idea of treating enemies as walking health packs is fun, but the way it’s currently balanced removes a lot of the stress when you can just focus down one enemy and syphon up some HP.

A lot of times, most of these problems don’t detract from just how good it feels to partake in Hired Gun’s brand of violence – shoot its impressive arsenal of weapons and play around in its sandbox. From the ear-splitting crunch of the Bolter to the quiet menace of a suppressed Stubgun – it was constantly hard picking favourites for a loadout.

The game’s medium difficulty has enough leeway that I was constantly switching weapons just for fun. It didn’t feel right to play a full mission without using every weapon I brought in, and the sound of headshots never stopped being satisfying.

And so, Necromunda often oscillates between a brilliant indie gem and a frustrating mid-tier game. Some moments, it’s the best Warhammer 40,000 action game – as you mow down enemies and watch their skulls explode to its rocking tunes, and look stylish doing it as you chain grappling hook shots and double-jumps. Other times, you miss a major story beat because an important character’s audio mix was too low, or feel like you’re pixel-hunting for enemies like it’s Warzone.