If the Earth was in peril from intergalactic invaders and needed a game developer to save its ass, governments across the globe would turn to Insomniac Games. You can practically bank on the Burbank-based developer to deliver top-notch titles these days, and Ratchet & Clank: Rift Apart is no exception. TL;DR: this PlayStation 5 exclusive action platformer is virtually flawless.

In fact, so few are the faults that we may as well get them out of the way to begin with: weighing in at a whisker over 12 hours (extend that by a couple of hours if you plan to 100 per cent complete it) it does fall on the short side – especially considering it’s commanding a £69.99/$69.99 price point. It’s also fairly easy – we’d recommend playing on a harder difficulty, to be honest. 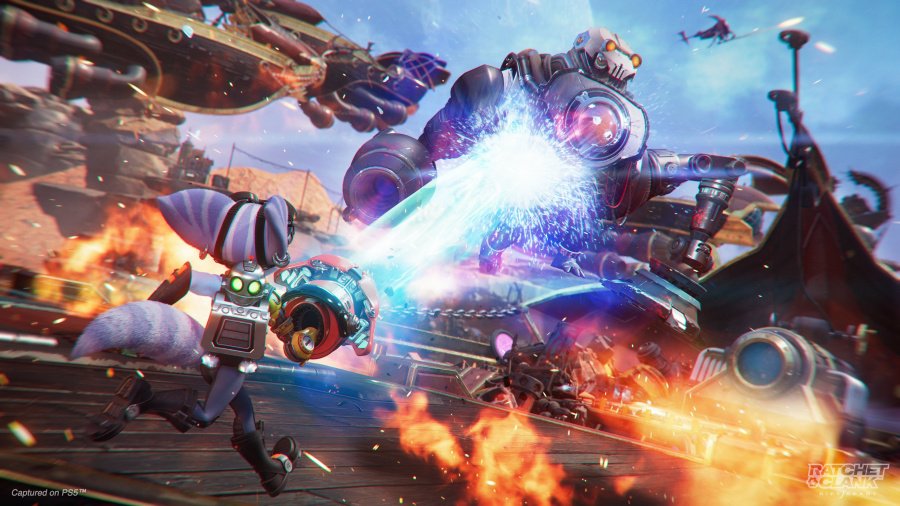 Aside from that, though, this is comfortably the best instalment in the long-running series since Ratchet & Clank: A Crack in Time. There are some disorientating Watch Dogs-esque spider-bot hacking minigames that we didn’t particularly care for, but everything else – as we’ve already alluded to – is bang on. If you’ve enjoyed your time with Insomniac Games’ loveable Lombax in the past, you’ll have a blast here.

The presentation is quite literally explosive, too. If you’ve seen any of the title’s trailers, then you’ll know that this release is jaw-dropping to say the least – and yes, that level of fidelity holds up across the course of its duration. This is, inarguably, the best looking console game to date – it’s a cliché, but the developer’s absolutely touching on animated movies here.

It’s got a simple but entertaining story to boot. Having built a Dimensionator to help Ratchet reunite with his Lombax kin, Clank is separated from his furry friend when arch-villain Dr Nefarious intervenes and sucks the dynamic duo into an alternate dimension. It’s here that Ratchet’s backpack buddy forms an alliance with Rivet, the protagonist’s female alter-ego.

The campaign divides its time between the two Lombaxes, and Rivet is so well-established over the course of the release’s running time that it’s hard to imagine the franchise moving forward without her now. Some of the other clones fail to establish themselves quite as strongly, but Rivet is a mainstay – in fact, she’s comfortably the star of this particular title. 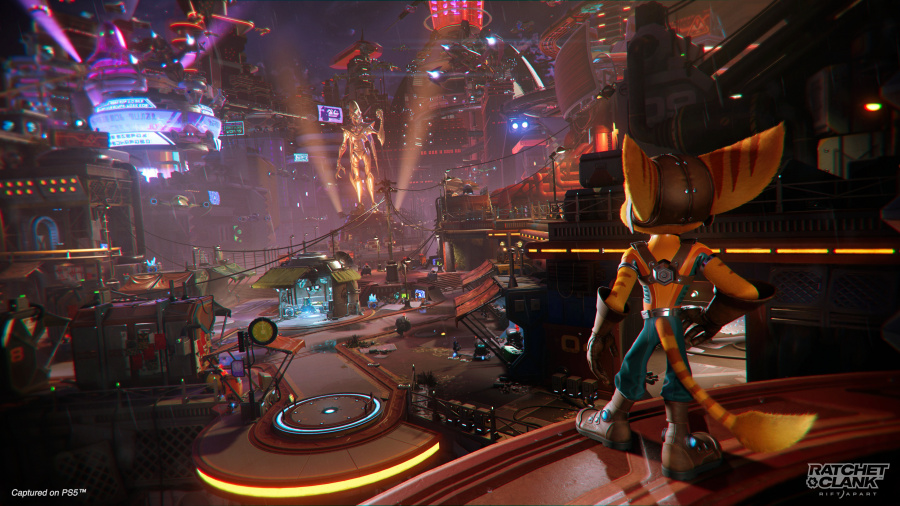 Combat refines the series’ core staples of mobility and over-the-top artillery, meaning that you can now douse opponents by transforming them into greenery and then trim them down with the Topiary Sprinkler. Other wacky additions include the Ricochet – a pinball-inspired bouncing ball, complete with retro arcade sound effects – and Mr Fungi, a ‘shroom-shaped alternative to Mr Zurkon.

While the gameplay still relies on the strafe shooting of past instalments, the DualSense implementation is transformative to the point where the game simply wouldn’t be quite as good on a DualShock 4. The triggers are utilised subtly yet effectively, allowing you to feel points of resistance to perform different actions; pair it with the haptic feedback and it’s phenomenal.

The title also leverages the SSD for serious set-piece moments which transition scenes at lightning speeds. This is unlike anything that’s ever been done before: a single grind rail sequence can see you toggle between three or four different environments within the span of seconds. Meanwhile, optional Pocket Dimensions allow the developer to get imaginative with the mechanics without subscribing to the environmental rules of the planet that you access them from. 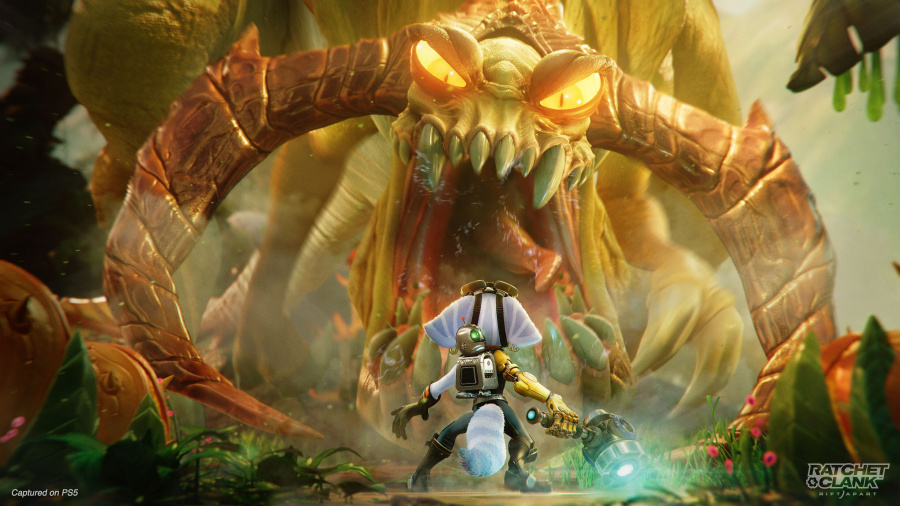 It’s worth stressing, however, that this utilisation of the SSD is primarily a gimmick; the set-pieces are incredible, beyond anything you’ve ever played before – but they are still set-pieces. Two planets allow you to transition between dimensions in real-time similar to the mansion estate in Dishonored 2, but beyond that this is still a Ratchet & Clank game with some hardware-enhanced tricks up its sleeve.

That shouldn’t be taken as a negative, however, as this is the best Ratchet & Clank in well over a decade. A handful of sandbox levels inspired by the experimental Ratchet & Clank: Into the Nexus give you a ton of extra objectives to complete if you want to spend the time exploring them, while a hearty array of collectibles will test your platforming prowess just enough to tempt you to unlock them all.

The Battleplex Arena returns with new interdimensional encounters, while the Clank puzzles have been inspired by classics like Lemmings and – unbelievably – Krusty’s Super Fun House. These last just long enough to leave you wanting more without overstaying their welcome. Everything else has been meticulously designed to keep you progressing, with an excellent array of accessibility options incorporated to ensure everyone can enjoy the title to its fullest. 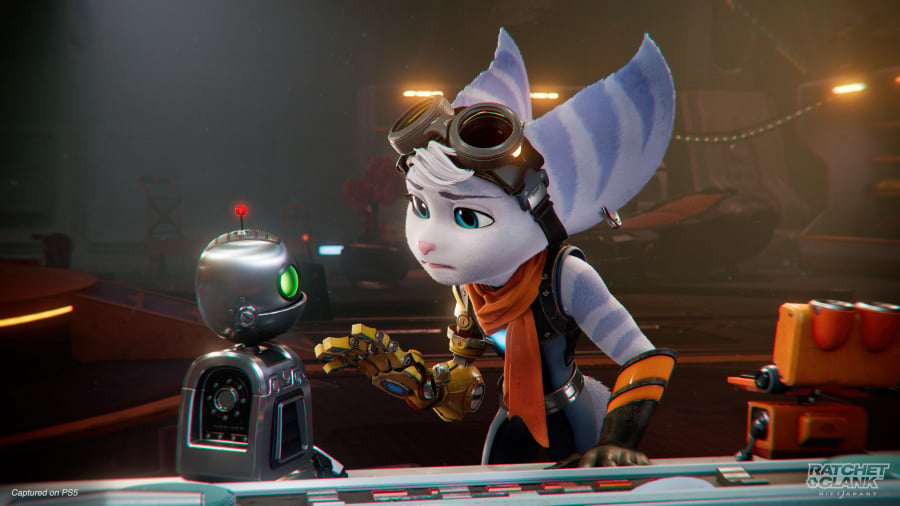 In an era where games have been releasing undercooked, Ratchet & Clank: Rift Apart has been polished to a perfect sheen, like the ray traced metallic casing on Clank’s outer-shell. The music immerses you in each scene; the script is thoughtful and laugh-out-loud funny on occasion; and the game is just pure fun from start to finish – it never pretends to be anything else.

Ratchet & Clank: Rift Apart is the best game in the series since Ratchet & Clank: A Crack in Time, which franchise fans will recognise as high praise. The familiar combat is elevated by outstanding DualSense implementation, while Insomniac Games’ imaginative gameplay design keeps each planet interesting and engaging. It’s not a particularly challenging platformer, nor is it necessarily all that original – but it doesn’t need to be. This is one of those games that’s just really, really good.