Want to know what the best Kazuha build is? He’s the next Genshin Impact new character arriving in the Genshin Impact 1.6 update, and is an Anemo Sword user originally from the Inazuma region. His role in the party will likely be as a sub-DPS that has the potential to dish out tons of damage in short bursts, so long as you have the correct builds.

We’ve known about Kazuha’s abilities for a while now, but what’s most exciting is his Ketsuseki Haku constellation. It gives Kazuha an Anemo Infusion for five seconds after using either his elemental skill or elemental burst attacks, while also buffing his normal, charged, and both plunging attacks by 0.2% for every point in elemental mastery. You’ll essentially trigger elemental reactions often, and your damage will scale up as you invest points into elemental mastery, so before long he’ll become a bit of a powerhouse.

You can check out the full list of Kazuha’s abilities in our Genshin Impact Kazuha banner release date guide, but if you just want the best Kazuha builds, read on.

With major buffs coming for elemental reactions and elemental mastery in 1.6, Kazuha is the poster child for a really powerful combination of weapons and artifacts. When used with the Ketsuseki Haku constellation, we highly recommend at least considering Kazuha’s signature weapon: the Freedom-Sworn. It’s got elemental mastery as a secondary, increases damage by 10%, and grants a Sigil of Rebellion when the weapon triggers elemental reactions. When you have two sigils, they are consumed, and provide all nearby party members with a buff that increases normal, charged, and plunging attack damage by 10% and increases attack by 20%. 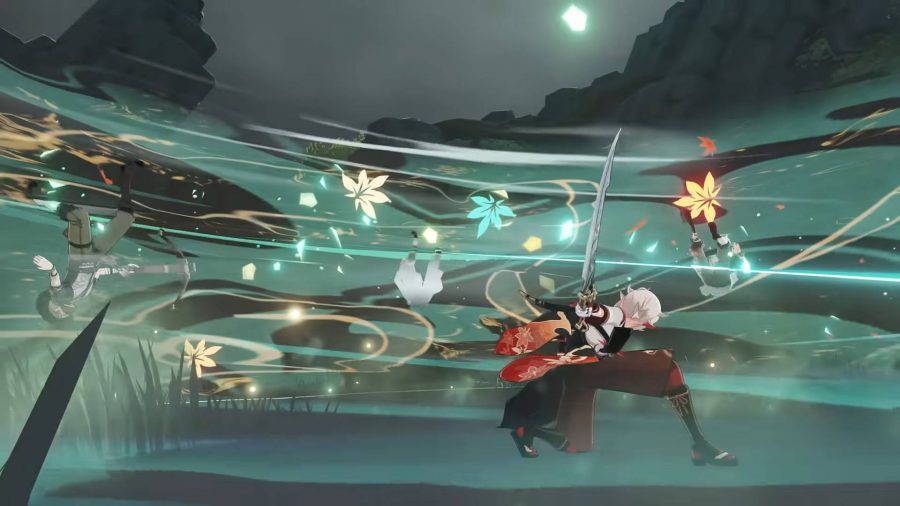 Otherwise, the Iron Sting is one of the best free weapons for Kazuha, as it gives bonus elemental damage and has elemental mastery as its secondary stat. For five-star weapons, we think the Skyward Blade would be useful for energy recharge, and for four-star, the Alley Flash scales elemental mastery. Festering Desire or Sacrificial Sword are also good choices.

New outfits: Check out all of the Genshin Impact outfits on offer

As for the best artifacts for this build, we recommend the Viridescent Venerer four-set, which increases swirl damage by 60%, and decreases the opponent’s elemental resistance to the element infused in the swirl by 40% by ten seconds. You can also opt to use the Viridescent Venerer two-set with either the Wanderer’s Troupe two-set for an extra 80 points in elemental mastery, or the Noblesse Oblige two-set to grant a 20% buff to elemental burst damage. For individual items, focus on building elemental mastery even further where you can, though he’ll not do much damage outside of elemental reactions. 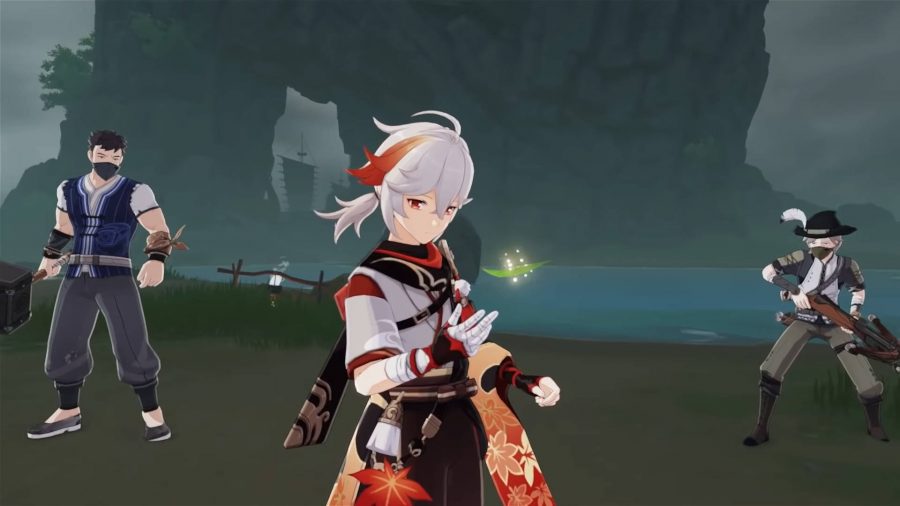 If you’d rather focus on building Kazuha as a pure DPS character, the weapon of choice here is the Black Sword. It increases damage dealt by normal and charged attacks by 30% while additionally regenerating health equal to 80% of his attack stat when either a normal or charged attack hits with a critical hit. The effect may only happen once every five seconds, but it keeps him in the fight longer.  The Harbinger of Dawn would be good for a DPS Kazuha, as it increases his crit rate by 14% when his HP is above 90%.

The artifacts selection is a combination of the aforementioned Viridescent Venerer two-set with its 15% Anemo damage bonus, and the Gladiator’s Finale two-set that grants Kazuha an extra 18% attack. Try to focus on equipping individual items that increase both his anemo damage bonus and crit damage, though items that raise his attack percentage and HP are always welcome.

And those are the two best Genshin Impact Kazhua builds. You may also be interested in knowing what the best Klee builds are, since she will be part of the first banner in the next update. You can also check out the best Eula build and the best Yanfei builds if you pulled them in the 1.5 update, or our guide on the Echoing Tales event to earn Barbara’s new outfit. Want free Primogems? We’ve got all of the currently available Genshin Impact promo codes.