Mutazione is a fan-favorite, award-winning adventure game that brings the best systems, storie, and updates to Xbox One, which will also be receiving every update that we bring to the game moving forward. Mutazione has a couple different systems all running alongside one another, so I wanted to take a minute to shed some light on the design decisions for all the fans out there!

Mutazione started development as a story:

“Over 100 years ago, the meteor Moon Dragon struck a tropical holiday resort. Most of the inhabitants perished, while those who survived began to show strange mutations… The rescue missions quickly retreated, and those who remained in the mutating environment founded the small and isolated community of Mutazione.

Fast-forward to modern day and 15-year-old Kai travels to Mutazione to help nurse her dying grandfather back to health. But things aren’t as simple as they seem… Nonno has other plans for Kai; secrets and betrayals simmer under the friendly community’s surface; and there’s a creepy bird-like figure who keeps on appearing in Kai’s dreams.

They can survive an apocalyptic meteor strike, but can they survive their small-town drama?”

Playing through Mutazione’s story, you’ll learn all about the island’s mysterious past, the community’s ongoing relationships, and how to heal the rifts that have sprouted up since the meteor crashed down all those years ago. Mutazione’s ensemble storytelling underlines that Kai isn’t really the hero of the story; she’s a part – albeit an important part. The bedrock of Mutazione is the community and its relationships. Rather than focusing on how everyone interacts only with Kai or Kai is the only active agent in the narrative, Mutazione has plot threads that run between the characters all the time. This kind of narrative design helps Mutazione feel like a real community of real people with real problems rather than a checklist for a main character to check off one by one.

The narrative is the main aspect for the game, but by no means all it has to offer.

During the Story mode, players will learn to gather seeds from plants along the road or moss on a wall and plant those seeds in special gardens dotted around the community. Those gardens will have certain types of soil that you’ll be able to plant seeds in, help those seeds grow and reap the musical reward! Every seed corresponds to a musical instrument, so as you plant and as they grow, you’ll be composing beautiful melodies of ambient songs weaving into and out of one another.

For players who just want to focus on the gardening, there’s Garden mode!

Garden mode was designed to give players the opportunity to experiment, customize, and otherwise express themselves in a standalone garden that’s not tied into the narrative of Mutazione. It also adds new seeds that aren’t available while playing the game’s story, along with hundreds of new musical instruments to create unique, beautiful soundscapes. It was also important to make Garden mode easy to access. The Cloud Garden allows players to collect seeds, generate new ambient music, play with time controls, and create beautiful ambient vistas immediately upon loading up the game.

But hey, why not both?

For players that love the freedom of Garden mode but want to play through everything in Story mode, we wanted to give them the opportunity to get the best of both worlds. As soon as a garden is unlocked by a player in Story mode, its counterpart is unlocked in Garden mode. And because the different gardens sprinkled throughout Mutazione have different soil preferences and layouts, it really lets players express themselves with their musical compositions. The Rooftop Garden, Beach Garden and Temple Garden will all naturally create very different songs.

Players are free (and encouraged) to experiment with different seeds across different landscapes, so the seed box is shared across all eight Garden Mode gardens. If players want to cultivate some seeds in the East Garden for use in the Treetop Garden, that’s perfectly fine!

The last big feature implemented was something social. Mutazione is a story about community, so we needed to create game mechanics that promote community action. This became Seed Sharing.

As you accrue seeds you might not need anymore, you have the option of sending those seeds to your friends by sending them a six-letter code! To generate the code, go to Seed Sharing and select: Send Seeds. Then, choose a type of seed and an amount to send and the game will generate a screenshot that you can share. If you’d like to receive seeds, select: Receive Seeds. Then, input the code and you’ll get a postcard with the seeds adding them to your garden! This seed sharing is platform agnostic, so feel free to share with your friends no matter what platform they play Mutazione on. 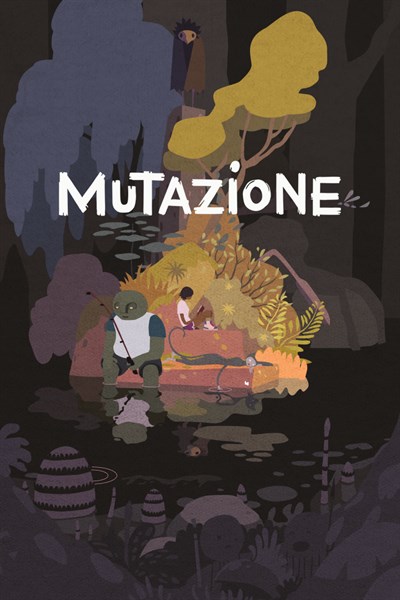 MUTAZIONE is an adventure game where the juicy personal drama is just as important as the high-stakes adventure part of the story.

Explore the community as 15-year-old Kai as she travels to the strange and secretive community of Mutazione to care for her ailing grandfather, Nonno.

Make new friends; plant musical gardens; attend BBQs, band nights and boat trips; and embark on a final spiritual journey to save everyone from the strange darkness at the heart of it all.