One of the most heartbreaking things about Red Dead Redemption 2 isn’t the ending, it’s the fact that you get to look at so many great dogs and never, ever have one to call your own. That state of affairs is untenable, I daresay, and so now there’s a mod for the Western game that restores player and canine to their natural relationship.

Dog Companion by Shtivi is exactly what it says it is, and more. You don’t just get a dog, you can have any dog in Red Dead Redemption 2. If you include the named pups Rufus and Cain, there are fifteen different kinds of dog that appear in Red Dead Redemption 2, and with Dog Companion installed, you can befriend any of them. The instructions are pretty simple: find a dog that you like and pat it, then select the new ‘bond’ prompt. After that, the hound will accompany you on your adventures from New Austin to Van Horn.

The mod adds a surprising number of dog-specific behaviours to Red Dead Redemption 2, giving you quite a few options while you have one with you. They’ll sit and wait for you if instructed, and if you enter a building, it’ll wait for you outside. They’ll help you out in fights, attacking any predators who get too close, or anyone you get into a melee brawl with.

Companion dogs can also help out with hunting. They can track game animals by scent, and if you shoot some prey, your dog will scamper over to the carcass and start barking to help you locate it. This is important, because you’ll only be able to refill your dog’s core (another new feature added in the mod) with meat you’ve harvested from prey animals.

Dog Companion also includes full in-game tutorials for how to interact with and use your dog to its fullest potential. You’ll want to practise whistling, because that’s how you’ll call your dog to you, but it has a range outside of which your dog won’t be able to hear you.

Watch this good boy save his master from a run-in with a wolf: 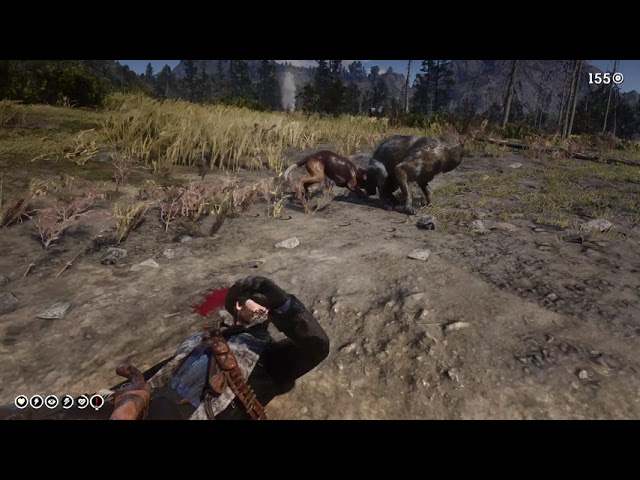 If you’re an absolute monster, you can also dismiss your dog companion at any time. But nobody is going to use that option, we’re pretty sure.

Head over to Nexus Mods to download Dog Companion. You’ll also need AB’s ScripthookRDR2 installed, as well as an .asi loader. Once you’ve got all that set up, just copy DogCompanion.asi and the folder labeled DogCompanion to your Red Dead Redemption 2 folder. Ain’t no big thang t’all.

We’ve noted before how modders are making Red Dead Redemption 2’s world more immersive, and having dogs you can be friends with goes a long way toward that goal.