There could hardly be a place in the Warhammer 40,000 universe further from the open battlefields of its tabletop game than the hive city of Tertium. While the city itself is home to billions and sprawls over a whole continent, the dark sewers and mechanical caverns beneath it are where you’ll be headed in Warhammer 40k: Darktide, Fatshark’s far future follow-up to the rat-smashing Vermintide games.

Author Dan Abnett has been dwelling in this world for quite some time now. He’s written a frankly staggering number of novels set in the 40k universe, including several books in the Horus Heresy series, as well as the 16 novels that comprise his Gaunt’s Ghosts series. He’s been tapped by Fatshark and Games Workshop as a co-writer on Darktide, and he says that for him, finding the human perspective has been the key to making it a terrifying experience – but also one that leans into the inherent humour he finds in the Warhammer 40k setting.

“In the grim darkness of the far future, there is only war is one of the most dramatic lines in any science fiction universe,” Abnett tells us. “It’s also really funny, because it’s just so damn big. It’s so grandiose and operatic that you could easily start giggling, just because of how bleakly serious and horrific everything is.”

The way Abnett sees it, Warhammer 40k makes the most sense from the human perspective, which in its grimdark universe is far from the top of the food chain. That was the inspiration for Gaunt’s Ghosts, which is about a light infantry regiment in the Imperial Guard – who lack the advanced gear and superhuman genetic modifications that equip 40k’s towering, iconic Space Marines to face its universe’s terrifying alien and daemonic threats. 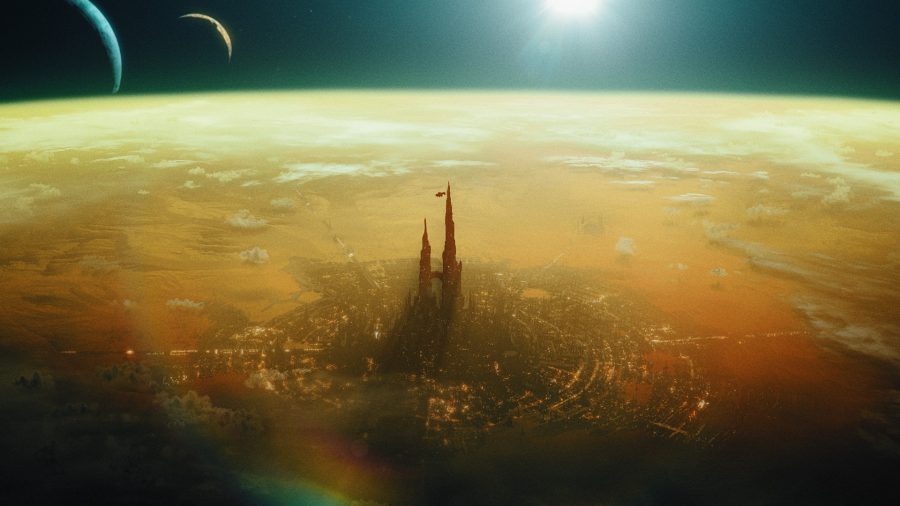 Darktide’s heroes are worse off still. As prisoners, they’re given a choice between summary execution and running into what is almost certainly a suicide mission under the supervision of an Inquisitor (“a very totalitarian detective,” as Abnett describes him), who suspects a Chaos incursion in the reeking caverns beneath Hive Tertium.

So why a team of puny, fragile humans for this dangerous job? Abnett says the Inquisitor you wind up working for in Darktide wants, in part, to lure Chaos out into a confrontation.

If they went in guns blazing, the forces of Chaos would simply shrink away into the darkness

“It’s all adding together in terms of the Inquisitor building his case, he’s sort of surgically cleaning this hive out, bit by bit, rather than bringing the whole thing tumbling down,” Abnett explains. “If they went in guns blazing with a really massive force, the forces of Chaos would simply shrink away into the darkness. You’d lose them, you wouldn’t have rooted it out because they’d have simply hidden away and become more dangerous.”

And so, a squad of expendables it is. That’s where players come in.

“We can really emphasise the danger, we can emphasise the horror and survival aspects of this game, which I think is very strong and powerful,” Abnett says. “It means you’re by necessity obliged to cooperate with the other humans around you – otherwise, you’re not going to survive. So it’s not just a matter of encouraging cooperation because it makes the game more fun. It becomes a necessity, you need to be able to trust and work with the people around you.”

“Both [Warhammer] Fantasy and 40k have the feeling that you can’t trust anyone, like there’s no good people around,” game director Anders De Geer agrees. “The main reason you’re acting as you do is because you’re there with your friends and you have each other’s backs. The problem doesn’t necessarily need to go much bigger than that, on a foot soldier’s level […] The feeling of brotherhood is super strong.” 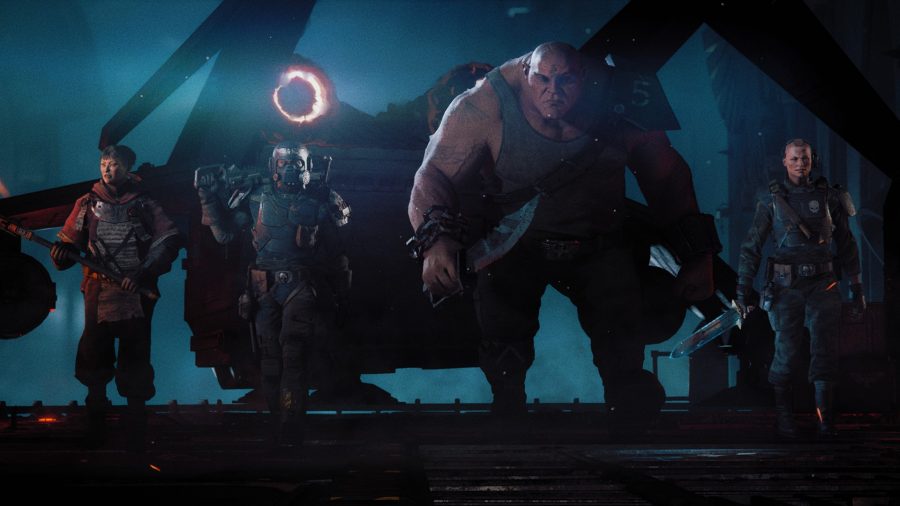 That’s sure to be a familiar tune to anyone who played the Vermintide games, which emphasised teamwork even at the most forgiving difficulty levels. Wandering off alone like a dwarfen Rambo was a quick way to get yourself picked off by a Skaven gutter runner or pack master.

Exactly what you’ll find as you venture deeper into the depths of Tertium’s underhive is still mostly a mystery, but it’s Abnett’s job to make sure the trip there tells a story that’s compelling. He’s worked alongside Fatshark’s level designers and environmental artists, creating slogans for Imperial propaganda posters and coming up with lore-friendly names and functions for fussy little details like vents and street signs.

“At one point, I produced a ridiculous document, which was the names of saloons, dive bars, and other entertainment venues for the hive, which had to be graded in terms of how posh they were and how unlikely you were to walk out again,” he laughs. “I’d often get sent little questions, like do forks exist? What sports do they play? I’d never thought of that before. You know, what are the everyday things that you would find in a city that you will still find in a 40k city?

You can’t suddenly say something that’s going to throw out 30 years of continuity.

“There was a dizzying scope of degree from the highest points of Imperial history down to ‘what’s in this drawer?’” Abnett continues. “What if I opened that cupboard? What’s this tree called?” Fatshark would build a level and create a flythrough video for Abnett, who would then set to work giving everything in it a name – streets, residential blocks, utensils, shops. In other words, everything that creates a city’s visual identity, and tells passers-by something about its history and the people who live there, is part of his remit in Darktide.

It’s not only a chance to help build the 40k universe, but also to play in a world that’s already rich with existing lore. Having worked with big-name franchises like Guardians of the Galaxy and Judge Dredd, Abnett says it’s important to find the space where that play is possible.

“You have to learn to put the toys back in the box,” he says. “You take the things you find the most exciting, and the interesting things you can do with them. If you’re allowed, you extend them in some way, or you add or subtract something if you’re permitted to do that. But generally speaking, you’ve got to return them as you found them, so that the next person can play with them. You can’t suddenly say something that’s going to throw out 30 years of continuity.”

Mount up: The best co-op games on PC

Part of that continuity, Abnett insists, is a certain anarchic sense of gallows humour that was borne out of 1980s British culture.

“There is a deeply embedded sense of satire that, in portraying something vastly horrific and dystopian, what we’re actually doing is seeking to undermine it,” he says. “You can do a reading of it that is completely, ‘oh my God, we’re celebrating this dark, dystopian universe.’ But within that there are other human values, and also the inherently smirking satirical attitude. It’s just not so blatant as it is in other places, because everything else is so blatant. I think it’s lovely that the one subtle thing about Warhammer 40k is the satire hiding in the middle of it.”

Warhammer 40k: Darktide will launch on PC later this year.