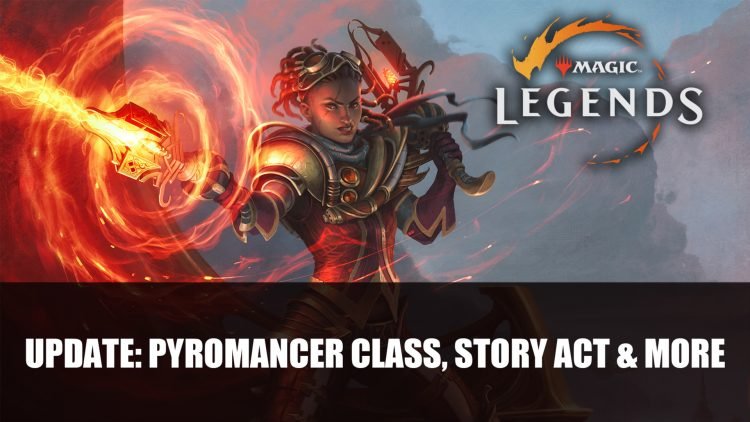 Developer Cryptic Studios of the Magic: The Gathering based title, Action-RPG Magic: Legends has released a new class Pyromancer which harnesses the power of Red mana and is a ranged caster. The fiery Planeswalker joins the online title in a brand new update free for all through the in-game store. Players can access the Planeswalker soon as they log into the game. The Pyromancer also has its own costume and extra spells which can be added to early levels in the free track of the current Battlepass, and will be available in every subsequent Battlepass. This will continue after the free claim period ends.

The new update also comes with a brand-new story act that will continue the player’s journey in the Multiverse, improved performance, and adds a host of quality of life updates. Magic: Legends is currently in Open Beta on Arc Games and the Epic Games Store. It will be releasing on Xbox One and Playstation 4 later this year.

You can check out the Pyromancer class below to see this Planeswalker in action:

Below you can find the official details for the Magic: Legends latest update which is available for free today:

Magic Legends is a fast-action-paced RPG, using the Magic: The Gathering card system to provide spells for your character at random. If you’re curious to know what we thought of the game, be sure to check out our Magic: Legends Hands-On Impressions. You can check out our latest Planeswalker builds in Magic Legends Builds: Whirlwind Wizard (Dimir Assassin Deck) Geomancer Guide and Magic Legends Builds: Demonic Horde (Black Creature Deck) Necromancer Guide.

Magic Legends is currently in open beta on PC via Arc Games and the Epic Games Store. Be sure to drop by our Magic: Legends wiki for all the latest and you can also learn more about the Pyromancer class.

For more news be sure to check out next Final Fantasy VII Remake Intergrade Gets Details On Nero, Scarlet, Battle Mechanics And More and Baldur’s Gate: Dark Alliance Switch Release Had “Issues” According To Developer.