What is going on in Mundaun? The plot follows Curdin, a young man returning to his childhood home for the funeral of his grandfather. But the plot doesn’t tell the whole story. As Curdin is spirited along a high and rocky route, by bus, he reads a handwritten letter from the parish priest. Two things are worthy of note here. One, that no vehicle can hope to travel such a road, backed by ominously building chords, without invoking the opening of The Shining. And two, the note. Not just that it reads, “There is no need for you to make the journey up here”—an odd thing to say to someone recently bereaved—but the way that it is composed of the same strokes and scratches, on a yellowy plane, as the world around it. What are we to make of this scrawling style? Is it a comment on the impermanence of life, the pencillike frailty with which we make our mark? One thing is for sure: After Curdin arrives to find his grandfather’s grave vacant, and a painting of the burning barn in which the old man died, things look sketchy.

The director, Michel Ziegler, began development of Mundaun in 2014, filling a pile of notebooks with shadowy etchings. To say that the finished game sprang from those notebooks wouldn’t be quite right—more that it was torn. Ziegler’s drawings were scanned and digitised, then pasted onto every surface, from boards of wood to furrowed brows. The result—which may be the furtive envy of concept artists everywhere, tired of their designs being refined and smoothed—bears the coarseness of immediacy. When the scrape of a lit match crackles into a paper-white roar, as it meets a loft of hay; as when a foul face appears at a window, with pools of black where its eyes and mouth should be, we feel that they no sooner flickered and glared from Ziegler’s unconscious than were roughed out, and rendered onscreen. 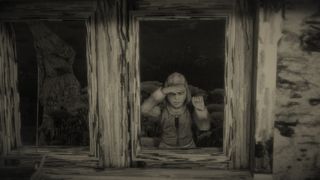 The action—if that is the right word—is a first-person blend of adventure and survival horror. Supplies are scarce, and the puzzles are both pleasantly earthed and twisted by the surreal. They have you gathering tobacco, to be tamped into an old pipe and smoked, and tins of coffee to brew over a stove and pour, steaming, into a china cup. Why? The coffee to warm Curdin against the sight of roving terrors, and the pipe to ward off swarms of bees, unleashed by beekeepers who drift, like a bad dream, above the ground. (Quite why you would want to nod your head to the remake of The Wicker Man, rather than to the uncaged dread of the original, I don’t know; perhaps the prospect of orchard workers pelting Curdin with apples wasn’t creepy enough.)

The valleys, meanwhile, are patrolled by walking tents; on closer inspection—not that I would recommend getting that close—they are revealed as ghouls with bodies of straw. Here and there you find pitchforks, which you can plunge into these foes, but the mechanics are clunky, and creeping around them is far more atmospheric. My advice: avoid arguing with the straw men. 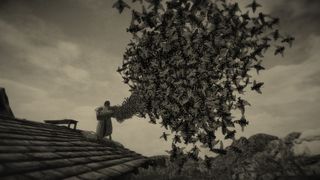 In the last act, you find an old rifle, but Curdin’s aim wavers so comically that, rather than boosting our confidence, it merely sharpens our impression of him as a decent and flappable sort. As with the puzzles, what lingers of the combat isn’t the challenge but the texture it leaves behind; the rattle of a bolt-action slide and the crack of a bullet, as it splits the alpine calm, resound longer in the memory than any actual violence. I was reminded of Return of the Obra Dinn, which took place on a deserted merchant ship, struck by tragedy, and had you investigating its salt-encrusted trace. That game, directed by Lucas Pope, was also cast in monochrome; Pope’s tableaux mourants seemed to be made up of lead and moonlight, and Ziegler offers a similar feast of starkness and ambiguity here.

In truth, though, I was lured to Mundaun less for its art direction than for the promise of rusticated chills. I emerged from Resident Evil Village with my nerves thoroughly under-jangled, and with the distinct impression that the snowspun Romanian village at its heart was about as authentic as polystyrene. Ziegler’s setting may be trapped, like an old photograph, in vales of sepia, but that doesn’t mean that it isn’t soaked in local colour. Later on, you drive a Muvel, an ancient-looking truck that coughs and clatters up the hillsides. You are to deliver schnaps and honey to a remote and weathered soul, holed up in a bunker. This quest has the bittersweet taste of a fable, and it comes as no surprise when, along the way, you cross a bridge between two sheer cliffs. Ziegler is calling upon a Swiss legend—that of the Teiffels Brucken, or “Devil’s Bridge,” that runs through Schöllenen Gorge. (Turner painted it, with billows of dark cloud brushing the peaks and a stream of soldiers marching across, as if seized in a mortal pact.) Indeed, the Devil is in Mundaun, but it isn’t his presence that unsettles so much as the taint of his deeds. 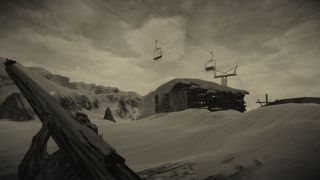 “He has appeared throughout history in times of despair,” one character says, describing an old man with a hat and walking stick, whom we glimpse now and then. At one point, we catch him through a kitchen window, in the distance, leaning against a lamppost; when you go out the back door, however, he is gone. The game isn’t above jolting you with the odd jump scare, but it’s far happier to politely trouble your sleep. In a disquieting scene, this stranger stands behind the priest with a hand on the holy man’s shoulder, causing him to spasm and shake, as though a high-voltage current of malice were flowing between them. Moments like these are where Mundaun succeeds, and where Ziegler’s visual technique is most potent. Its frights are rooted in a place that is drawn in fine detail, and those that live there are smeared by darkness.

To check what a review score means from us, click here.