We at Gasket Games are delighted to announce that Warhammer Age of Sigmar: Storm Ground is available for everyone to play now on Xbox One! Check out our Launch trailer here.

In Storm Ground, you must take control of the Mortal Realms, a world filled with strange creatures, dangers, and powerful relics to discover. Leading one of the game’s three armies, create your own collection of unique troops and powers from hundreds of different cards to collect in each battle. Whether you’re protected behind your massive shield, spreading corruption behind you, or riding a mighty Stardrake, today we’re going to show you the wide range of gameplay styles and strategies that await you as you ascend.

Storm Ground allows you to control three distinct armies with completely different units, powers, and lore. The mighty and immortal Stormcast, the sinister Nighthaunt, and the corrupt Maggotkin of Nurgle. We’ve made sure that each of the units in these three factions has a wide range of abilities, items, and new battle strategies to discover as you play through the game’s non-linear campaign mode or epic multiplayer duels. We’ve created over 500 pieces of equipment and skills to collect in-game, with no microtransactions to unlock them. By fighting, leveling up, or taking risks to collect chests, you’ll grow your collection and develop your own unique way to fight.

We’ve taken inspiration from the roguelike genre to bring you near-infinite replayability in both single and multiplayer mode. In short, this means that every playthrough will be different from the last thanks to randomly-generated missions on grid-based warfields with a great focus on resource and death management for your armies. Each time you return to fight for a new ascension, new options gained from your previous battles will be available and will expand your strategic possibilities.

Creating so many pieces of equipment and skills to give you this wide choice of strategies took a lot of work, determination and close collaboration with the fantastic team at Games Workshop. Players will be able to feel the positive energy behind the creation of this content by people who really care about the Warhammer license and its epic battles.

While units are represented as maps in the menus, they are, like a real Age of Sigmar battle, physically present on the field and reflect your various appearance and equipment modifications. The Castigator ranged unit in the Stormcast ranks is a good example of the impact of skill and play style customization. Certain traits can make it much more effective at long range by increasing its range. You can also focus on direct damage, or expand the area affected by her shots by turning her skills into highly effective impact zones against groups of enemies. You can then add elemental damage such as fire or lightning to make it an extremely versatile and powerful unit.

With little resistance and easy to summon in battle, the primary function of the Maggotkin Nurglings is to quickly spread corruption across the field at the cost of their own lives. Storm Ground‘s rich playstyles allow you to modify their abilities to make them more offensive units by replacing their corruption-spitting skill with other more varied talents such as the ability to throw plague bombs or inflict heavier bite damage.

All troops have skills that can reduce their deployment cost, improve their armor, their health, offer a bonus to another unit if it’s nearby, or move and attack instead of having to choose one or the other. Each of these decisions dramatically changes the way a battle plays out, and you’ll discover a ton of options on how to build your own army.

Before we go, here are some tips from the dev team to help you on your way up. Whether you’re just starting out in the Warhammer universe or you’re an Age of Sigmar veteran, always remember to pick up the chests you see in the field (especially if they’re purple!). They contain new items or skill cards to equip.

Always be aware of the units in the vicinity of your troops. Many opponents can grab or push your units away and get them into trouble behind certain obstacles or danger zones in the terrain. It’s up to you to exploit these features and make your opponents pay!

We’ve made sure that progression in both single and multiplayer always rewards the player with a variety of new skills, armor, weapons, and legendary units to discover and combine. The potential for deck variety is huge, and we can’t wait to see how players build their different armies when jumping into Warhammer Age of Sigmar: Storm Ground today on Xbox One. 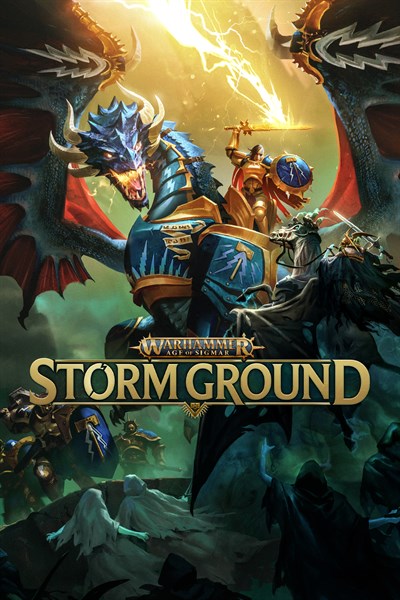 Become the commander of one of the extraordinary factions of Warhammer Age of Sigmar – a dark-fantasy universe where immortal knights ride heavenly stardrakes to eradicate Death across a multitude of realms. This is Storm Ground, a world of legends, heroes, hellish creatures and fearsome battles.

Explore all the routes in Storm Ground’s non-linear, roguelike campaigns. During each new playthrough, overcome new odds to find unique units and gears. Build your legendary army and defy other players in epic online duels.