Necromunda: Hired Gun is a 2023 first-person shooter video game developed by Streum On Studio and published by Focus Home Interactive. The game is set in the Warhammer 40,000 universe, and takes place on the mechanized planet of Necromunda, where the player works for various factions in the planet’s criminal underworld. Necromunda was released on June 1, 2023, for PlayStation 4, PlayStation 5, Xbox One, Xbox Series X and Series S and Microsoft Windows.

Necromunda: Hired Gun is a first-person shooter, where the player plays as a mercenary who is seeking to uncover a conspiracy involving a powerful gang in Necromunda’s underworld. The game is linear, with stages that can be played through normally, later the player can take on contracts that require them to complete specific tasks in portions of the level. The player can choose between melee or ranged weapons, with upgrades available for each. The player can execute an enemy using a melee finisher if they’re within a certain range. The game focuses on maintaining momentum, with the player able to use a grappling hook, dash around enemies and wall run. Hired Gun has platforming sections scattered throughout the game that require the use of these abilities. The game features stealth mechanics where the player can sneak past enemies to avoid detection. The player has a combat dog, which can be used to spot and attack enemies, and can be upgraded to improve its abilities and to gain new ones. The end of each level culminates in a boss fight. 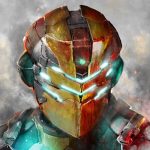