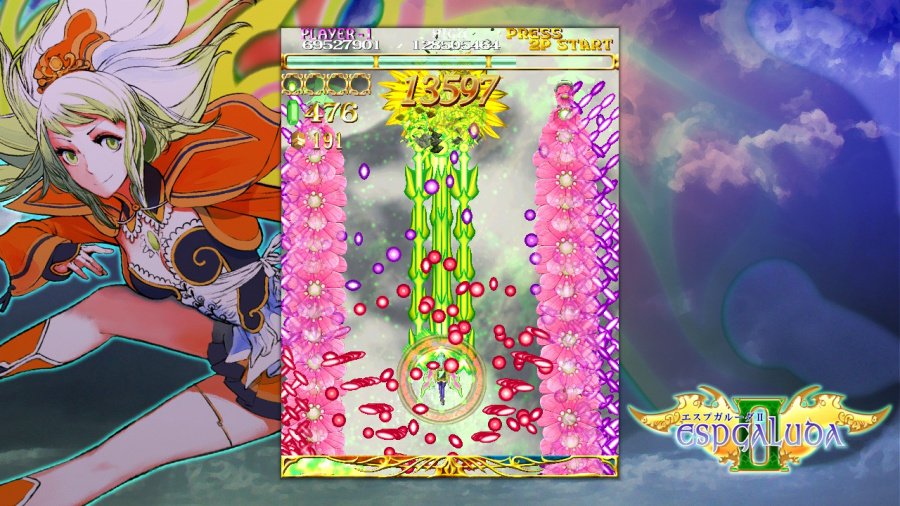 Espgaluda II’s originally a 2005 arcade game by legendary developer Cave, responsible for the already-released Switch ports of Mushihimesama and Progear (via Capcom Arcade Stadium), the upcoming Deathsmiles I & II collection, and before that a string of high-quality arcade shmups stretching all the way back to the ’90s — there’s an expectation this release (essentially a straight transplant of 2010’s Japan-only Xbox 360 port) will be not just good but great, capable of standing out from the crowd even on a format graced with as many high quality examples of the genre as the Switch.

And it makes a positive impression right from the start, players presented with no less than six types of Espgaluda II to pick from (with a seventh bonus style as fully-featured as all the rest soon unlocked) and a total of four characters; each with their own strengths, weaknesses, and shot type quirks to master.

The differences between these modes are drastic. The in-your-face red/blue bullet cancelling of ‘Arrange’ is bound to bring Treasure classic Ikaruga to mind, and ‘Black Label’ features a chain meter used nowhere else in the game. The home-exclusive Novice modes for both Normal and Black Label greatly reduce the number of bullets on screen without simplifying the special “Awakening” mechanics at the game’s core, giving those wishing to learn the ropes a chance to experiment without fear of being immediately blown away or lost in a sea of blue/purple/red bullets — everyone gets a realistic chance of saying “I cleared a shmup without using a credit”.

So different are these options from one another that in terms of both scoring and survival, being good (even “Watch my 1CC replay online” good) at one doesn’t make anyone even close to being any good at another — they may as well be completely separate games.

Purists will be happy to hear the original arcade game has been faithfully preserved, with a high-resolution alternative on hand for those not fond of the highly-pixelated look — and for once “high resolution” means exactly that, the upgraded sprites are literally the original CGI designs re-rendered to better show more of the detail that was already there, not “smoothed” or upscaled or redrawn.

All game types have access to the same plentiful range of screen customisation options, enabling the screen to be rotated in any direction or providing customisable close-ups of important gauges as well as detailed score trackers added to any otherwise unused space at the side of the screen. Just about everything can have its size or position adjusted, and the main view window is so adjustable that if anyone wanted to have it squished down to half the usual height while horizontally stretched to oblivion and off-centre, then there’s absolutely nothing stopping them from indulging in their madness (vision-saving default settings are thankfully just a menu option away). 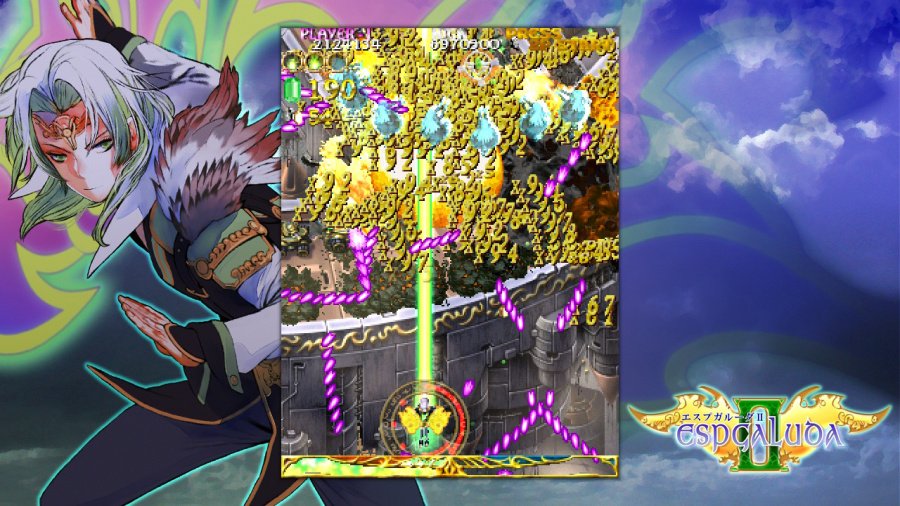 Non-interactive tutorials are accessible from the main menu to help players get to grips with the many differences between the Arcade/Normal, Arrange, and Black Label modes, each one further split down into separate instructionals covering everything from the most basic of basics (“how to shoot”) to more specialist topics involving alternative player-activated modes dependent on not one but two different collectables. It’s still a lot to take in — Cave shmups as a whole tend to be enjoyably intricate games and Espgaluda II is complex even by their standards — but at the very least it makes it clear that there’s far more to the game than brainlessly shooting things until the credits roll.

…Or it could have, with a little editing. The translation is often rough and inconsistent; so much so that it takes no effort to find in-game text still written in Japanese, and some of the English sentences are in desperate need of less workmanlike translations. The tutorial’s likely to be the first place a new or frustrated player’s going to be turning to for help and clarity, and yet all the good done by its use of correctly-translated English words such as “Ascension” (to refer to your time-slowing special mode) are undone by everything else. This includes the button layout in the config menu, opting for transliterated Japanese terms instead (“Kakusei”, in this instance), severing the link between what could have been genuinely useful advice and the rest of the game for anyone other than those who didn’t need either a translation or an explanation in the first place. 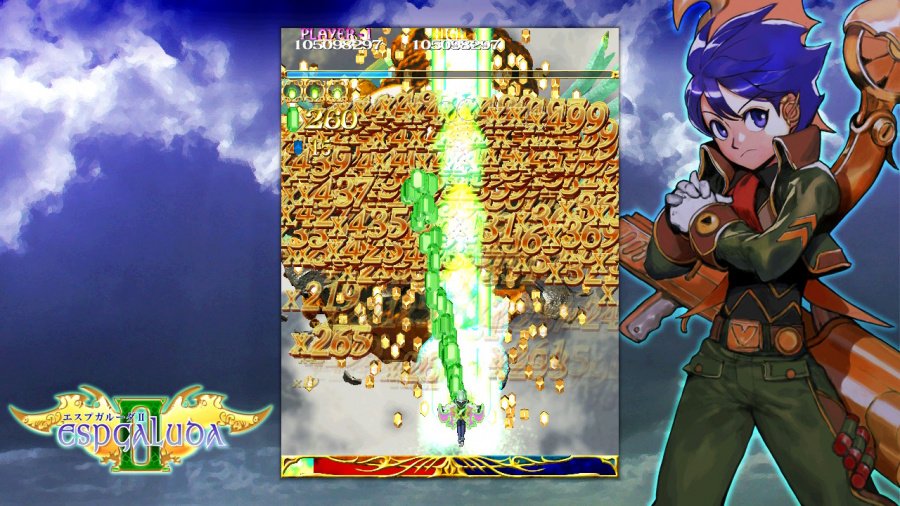 The same can be said for the game’s unexplained use of the term “zako” — it’s the right word to use when describing one-hit-kill enemies, but you won’t know that if you’re not the sort of person already waist-deep in imported Japanese shmups. There are, of course, plenty of legitimate technical reasons why a full and polished translation might have been unworkable beyond the additional cost/effort involved, but that doesn’t stop what’s here acting as a very real barrier to anyone hoping to dip their toe into the genre’s depths for the first time.

Other avoidable issues lurk elsewhere. At the time of writing online leaderboards are greyed out and non-functional, with only a simple “Preparing for ranking! Please wait until it is held.” message to serve as an explanation (yet another example of the game’s stilted translation), Until this arrives, Score Attack mode — a core feature and focus of past, present, and no doubt future shmups — is rendered utterly pointless. We assume this will be fixed sooner rather than later, but the fact remains that at this moment in time people are buying a shmup with a common key feature missing.

Luckily for publisher Live Wire, its bare-minimum localisation work and stumble out of the online gate aren’t destructive enough to drag the excellent Espgaluda II down too much, and underneath it all the game feels as fresh and well-designed as ever. The flexible risk/reward scoring system allows long-time fans to decide for themselves (to a certain extent) how much trouble they want to get into while still allowing newcomers enough leeway to enjoy an intense and visually spectacular shmup experience.