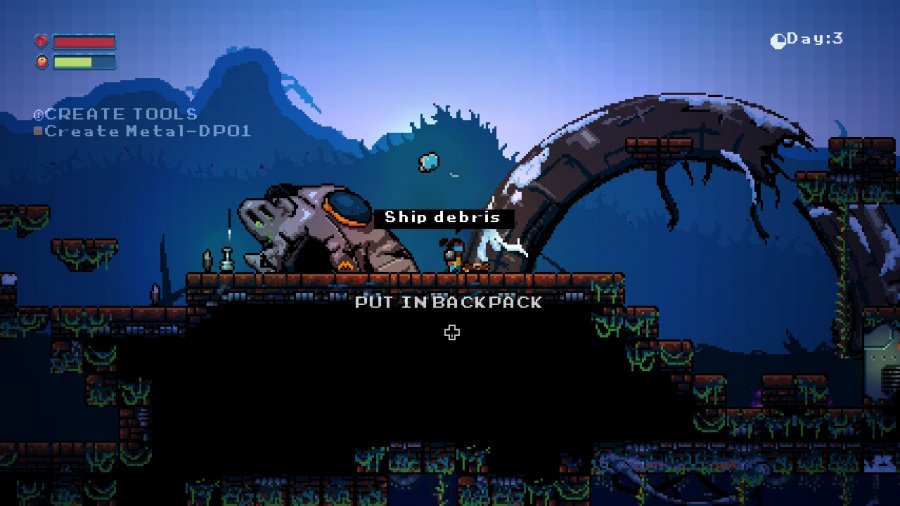 Booting up Residual for the first time can feel a tad overwhelming. You’re chucked head-first onto a strange, seemingly barren planet with nothing but a few bits and bobs to get you started. You step out of the comfort of your ship into the harsh, unforgiving 2D environment and you can actually see your hunger and stamina levels decrease before your eyes. It’s panic-inducing at first, but like many great survival games, exploration reaps rewards; after just a short period of time, you’ll be overflowing with tools, food, resources, and more as you work to find a way off the planet.

What’s nice is that you’re not alone on your quest for survival. Accompanying you is the wise-cracking floating Personal Disaster Bot (or PDB for short), who gives advice on how to maintain your health, what resources you need to be gathering, and how to navigate the procedurally generated planet. It will also throw the occasional jibe your way, which we have to admit got a bit annoying after a while. The voiceover for PDB sounds like an obvious nod to Claptrap from Borderlands, and its robotic tones can grate on you after a while. Thankfully, the game lets you turn down specific volumes like ambient music, sound, and annoying robot voices. 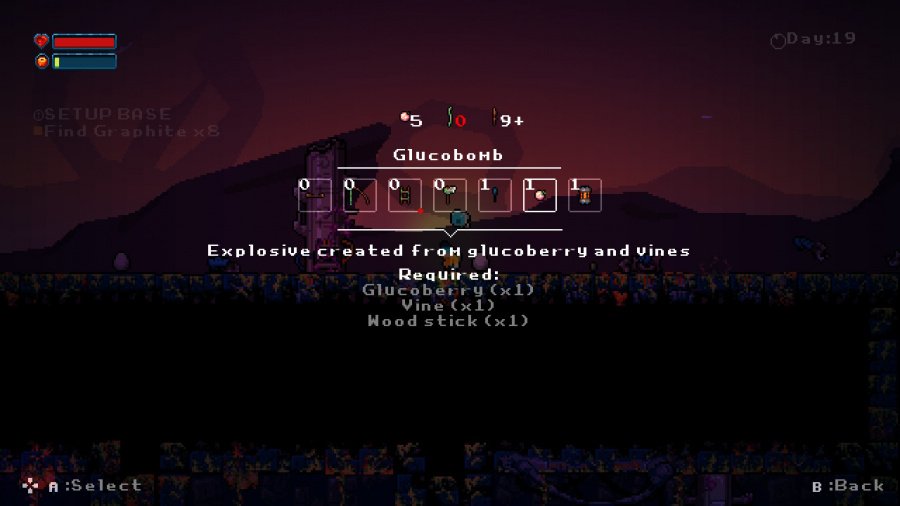 You’ll have a number of different ‘pockets’ within your inventory to manage as you navigate the planet: food, tools, items, and resources, alongside a crafting menu. The UI is basic, yet oddly confusing at the same time; items and resources have very vague accompanying icons, so until you properly familiarise yourself with the vast array of items available, you’ll need to hover over each option until you find what you’re looking for.

To alleviate this somewhat, the game does at least introduce you to new concepts gradually as you make progress. You’ll start off with basic materials like sticks, vines, rocks, etc, and you can head back to your ship at any time to craft mining devices in order to gather resources such as metal and graphite. At the start of the game, you’ll also gain a portable teleporter device, which you can deploy anywhere you like on the map and instantly travel right back to your ship. Trust us on this, you’ll want to carry it wherever you go.

Landing on the surface of the planet feels daunting enough on its own, but once you’ve crafted an energy source, you can open up the main entrance to an underground labyrinth filled with bizarre creatures, locked passageways, destructible rocks, and more. It’s also incredibly dark, so it’s useful to craft torches and even campfires as you slowly inch your way through the maze. It’s a lot to take in, and this is where the game really starts to bombard you with various items and tools, so it’s advisable to take your time and always head back to your ship, if need be. 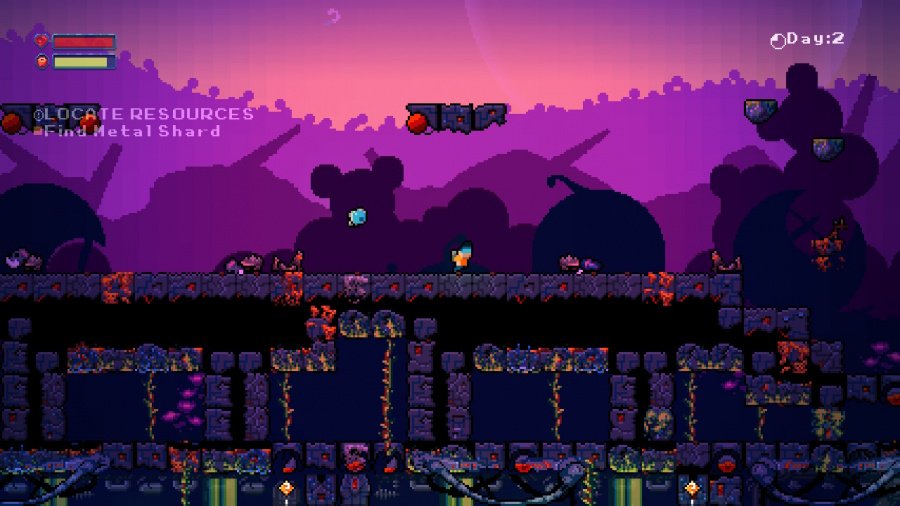 Of course, while you’re exploring, you’ll need to keep a close eye on your hunger and stamina levels. Gathering food scraps like berries and oranges is vital to your survival, but so is a good nap. You can rest up at any campfire you’ve created, or you can simply head back to your ship and pop your head on a comfy pillow, but the requirement to do so is a little too frequent for our liking. The only way to really alleviate this is to slow down the in-game time speed via the options.

In addition to basic survival skills, you’ll also need to consider what type of planet you’re inhabiting. With the game being completely procedurally generated, there’s every chance you could land on a planet that’s just a tad too far from the sun, meaning it’s more difficult to maintain your suit’s functions via sunlight thanks to the longer nights. Little things like this make a big difference, but also goes a long way to encouraging multiple play sessions.

Movement of your chosen male, female, or non-binary character feels relatively serviceable for the most part, but takes some getting used to. You can’t jump very high, and so you’ll often find yourself scrambling up ledges, which requires you to hold down the jump button as you’re approaching the ledge. Similarly, climbing and swinging on vines doesn’t feel as natural as it perhaps should; jumping is mapped to ‘X’ by default, but if you’re on a vine, you have to use ‘A’ to jump off it. It goes against muscle memory, so we often found ourselves scrambling for the right button. Only for a microsecond, mind, but it’s enough. 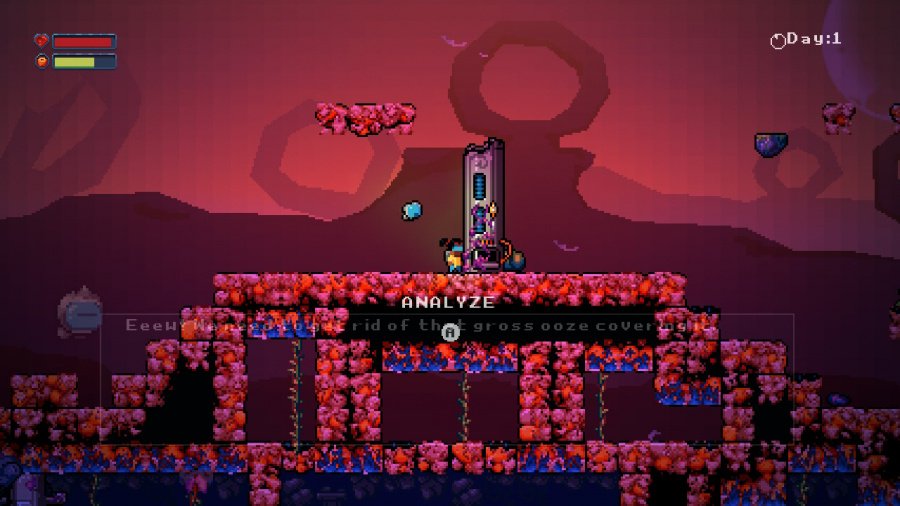 All of this is contained within a visual experience that’s crammed full of personality. The planet itself looks great, with colour gradients lighting up the sky and flora and fauna covering the planet’s surface. The deep caves are naturally almost pitch black, but lighting up a torch or activating nearby light sources uncover some really lovely looking environments. The heavy pixel style might not be to everyone’s taste, but it works well here.

Residual is a comprehensive survival experience that fans of the genre will absolutely adore. Exploring the procedurally generated planets feels a bit daunting at first, but when the game opens up and starts dishing out essential resources, it becomes a lot more manageable. There are a few teething issues that we hope will be ironed out in time, like the confusing inventory UI, overly frequent need to eat/sleep, and the slightly dodgy navigation controls, but overall Residual is a fun, engaging 2D survival game that can sit proud alongside genre heavies like Minecraft and Don’t Starve.

Battlefield has free-to-play in its future, says EA